Rooms of my own

As part of their Whose London Is It Anyway? season, Camden People's Theatre have turned their window spaces into rooms – a toilet, a kitchen, a bedroom, a sitting room – and invited people to occupy them during the day. Each window has an A4 poster highlighting some appalling fact about the entirely fucked London property market: for instance, that a garage in Camberwell recently sold for £550K. Don't get me started. It's a nine-hour shift (initially advertised as 12 hours), which for me translates as the longest amount of uninterrupted time I've been able to sit at a computer since before the kids were born, so naturally I signed up and here is me earlier today: 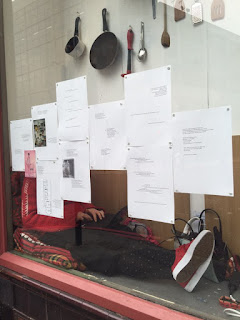 Yes of course I hid behind a curtain of paper: what do you think I am, some kind of exhibitionist? I can't remember the last time I felt so painfully self-conscious. But as people, especially children, began to peek around the paper to wave hello, the exposure grew less excruciating. And it certainly gave me focus: I got more writing done today than I did in the whole past fortnight.

Back in the days when commuter trains were barely bearable (as opposed to wholly impossible), I used to see people with copies of the Evening Standard, and then the Guardian, encounter something I'd written, occasionally reading a few sentences but mostly turning the page. So I'm used to people ignoring my writing: it's a useful reminder to check my ego. Having readers is far weirder. Especially when those readers are standing on the other side of a sheet of glass, barely six inches away.

Their proximity made me glad that I believe, very deeply, every word they read today. It made me recognise something else about indifference, too. If no one cares about what you write, then you have the freedom to write as you choose. I know this, always have, but often forget. Thank you, CPT, for opening up a space today in which I could (re-)remember.

Below is the text (plus the images) behind which I hid. And seriously, if you haven't read A Room of One's Own yet, or even recently, treat yourself.

Before that I shared with my younger brother. Our room was a prison far from the playground; a forest and we its falling timber; the hideaway den of the Dukes and cousin Daisy. I knew I needed a room of my own the day I – oh, wait, I'm not allowed to tell that story here.

I couldn't decide what colour to paint my first room of my own, so we settled on pink-for-a-girl. My best friend at university thought it was hilarious, and bought me this postcard so I'd never forget. 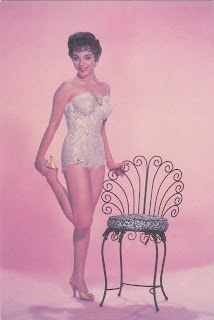 My second room of my own was at university. Inspired by the painter Pauline Boty, I turned one wall into a scrapbook collage of my life. It's one of the best things I've ever made. 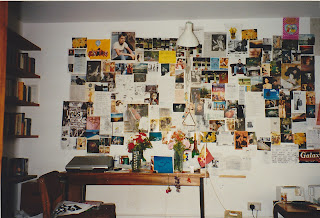 At university I read Virginia Woolf's A Room of One's Own for the first time. That was half a lifetime ago, so I don't really remember what I thought, but I was already feminist, so I'd guess it confirmed everything.

My third room of my own was in a rented flat south of the river. My parents had nowhere to live because they had bought a derelict house, so they became my lodgers. I laid down the ground rules. Amazingly, they agreed.

At 25 I bought a flat of my own. The older I get, the stranger this seems. I painted the walls sunflower yellow, crimson and teal, and saved the violent pink for the toilet. There was a room for sewing, a garden out of the kitchen, and my flatmate introduced me to swing. I still live there in my dreams.

When I got married I had a succession of rooms of my own. The first became the nursery. The second became a toddler's bedroom. The third was always cluttered with scooters and spare chairs and bags of recycling; then, in 2014, it disappeared to become part of the kitchen.

And that, my friends, is how motherhood affects personal space.

I re-read A Room of One's Own last week and might do so again every year now. It's astonishing. And painful. Woolf published it in 1928, but the world she describes and rails against is still recognisably ours. Patriarchal. Unequal. Shaped by and seen through “masculine values”.

Men, she noticed, didn't like feminists saying such things. They tended to respond with a “ cry of wounded vanity … a protest against some infringement of his power to believe in himself”. Social media and comment boxes are full of such protests, not only when women speak, but people of colour and queer gender or sexuality, too. 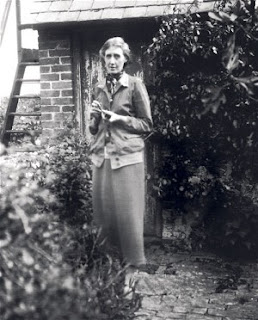 I remembered Woolf's call for a room of one's own, but not the accompanying cry for money – £500 a year. She makes quite the argument for Basic Income.

Woolf believed that, with a room of her own and money to support her, women would be able to write truly, of themselves: finding “some new vehicle, not necessarily in verse, for the poetry in her”.

I've always earned money through writing, and that money has always given me rooms to write in. The bit I'm struggling with is the poetry. The art.

Here's something else Woolf recognised: “Life for both sexes … is arduous, difficult. A perpetual struggle. It calls for gigantic courage and strength. More than anything, perhaps, creatures of illusion as we are, it calls for confidence in oneself.”

You could call confidence another kind of room: not physical, but mental.

That mental room is one money can't buy.

In her book Depression: A Public Feeling, Ann Cvetkovich argues that depression is “how capitalism feels”. How having money and a room of one's own feels.

I look at the entrenched inequality in this country, and of human existence generally, and feel not the strength of someone who has, but horror at how many have not.

I look at London, the room I was born in, and how much money it demands that people living here make, just to get by, and feel not the confidence of someone who got lucky here, but anxiety at what it means to embody a social system, and bring children up within it.

I keep writing through that horror and anxiety, but it feels selfish, immoral and wrong.

On the final page of A Room of One's Own, Woolf looks forward to the day when women have not only “five hundred a year each of us and rooms of our own” but “the courage to write exactly what we think”.

I think we have a responsibility to use our money and our rooms to write our way out of this inequality.

That's what I'm trying to do in this little room, this minuscule room of my own, today. Wish me luck. And thank you for reading. x
at 12:03 am